SERCUL in partnership with Murdoch University’s Freshwater Fish Group and Fish Health Unit have produced an educational package on Freshwater Fauna of South-western Australia. Two brochures, a field guide and three short films have been made which are being distributed throughout the south west, and around the world, to relevant organisations, businesses, educational centres, community groups, individuals and many more.

In August 2011, SERCUL and Murdoch University launched the educational resources at the Canning River Eco Education Centre. The new publications were then presented at educational seminars at different locations throughout the South-west of WA on the Freshwater Fauna Roadshow Tour.

SERCUL are excited to announce that ‘A Teacher’s Guide to Freshwater Fishes, Crayfishes & Mussels of South-Western Australia’ is now available. These booklets provide curriculum linked education activities for Years 1 -10 and compliment the Field Guide and other education resources.

A Teacher’s Guide to Freshwater Fishes, Crayfishes & Mussels of South-Western Australia has separate booklets for each year level from Year 1 – 10.  The aim of this Teacher’s Guide is to provide a supporting document for the book, ‘A Field Guide to Freshwater Fishes, Crayfishes and Mussels of South-Western Australia’ and enable students to develop an understanding of the importance of our native fish and other fauna and the problems they face in our waterways. This resource was written to provide teachers with activities which link directly to the National Science Curriculum with a local focus.

The activities provided within each booklet are designed to suit the specific year level.  Each booklet also contains teacher notes and student information pages with detailed information about the specific freshwater fauna species highlighted. For each of these species where it can be found in the Field Guide and whether film footage is available to view is also included. Key words are used to help students learn more about these topics through them researching their meanings and finding the words in a Hidden Word puzzle.

This Field Guide summarises all that is currently known about the iconic, yet often unnoticed species of fish, crayfish and mussels inhabiting the fresh waters of south-western Australia. It offers useful tips on how to recognise and identify these animals, as well as information about their distribution, behaviour, biology, and the threats they face.

The book is published by the South East Regional Centre for Urban Landcare and Murdoch University and is funded by Lotterywest. 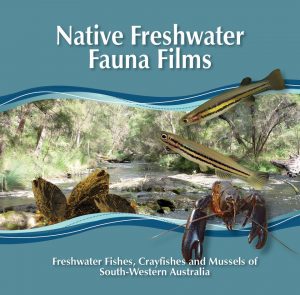 The three short films were made by Ashley Ramsay of ENVfusion.  The films are available to buy as a DVD.